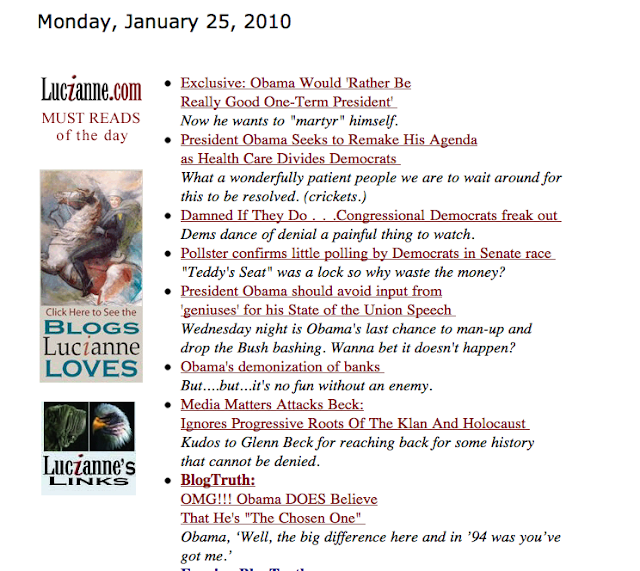 Reflections on a good week

I had a drink with my neighbour yesterday belatedly to celebrate Chris Christie's win in New Jersey. On top of that was the Massachusetts win, the apparent death of Obamacare and the Supreme Court re-instatment of free speech for corporations other than media corporations. Some week.

It's good that Obama is president. Better Obamanism then renaissance than McCainism then decline. The growth of giant government has been sapping the West all my lifetime. Maybe Obama is the culmination of the sickness which provokes America's immune system, ie its culture and Constitution, to kick in hard and inoculate the body politic against socialism.

For the time being it's good that the right has no leader; better that the true character of the country should emerge spontaneously. A leader like Gingrich of old or Palin of the future would be a target to distract the aim of the Democrat circular firing squad. For the time being the hobgoblins are mumbling 'Bush did it' and 'teabaggers' as tho obscenity were argument, which I suppose it is in their circles.

I foresee that blacks who presently vote as a bloc of serfs will move away from mono-politics as they see that Obamanism is a dead-end. Plenty of decent blacks get it that abortion and absent fathers are their modern holocaust not racism. Maybe someone like Allen West will show the way.

As the whiskey kicked in I orated that the NJ Governor needs a vision beyond a tax freeze. NJ is almost the worst state in the Union to do business in thanks to the cancer of big government and big tax, but its natural setting is top-notch; great beaches, 4 seasons, lots of open space, NYC, strong communities outside the statist dependency hatcheries, hours from Britain and Europe, major international airport, entrepot potential thanks to the deeper, wider Panama Canal....
The vision should be a special economic zone something like Shenzen next door to Hong Kong or Eire minus the Euro. The emphasis should be on tax incentives for foreign capital and when I say 'foreign' I mean flight capital from California especially. Cutting tax collects more tax; cutting government cuts corruption. Anyway Nj should be thinking like a young ambitious far eastern mercenary state not like a Californian government apparatchik or a tenured academic. Go East, young man, they'll say in Silicon Valley.

The cherry on the top of last week was a climate change for Anthropogenic Global Scamming. There were grotesque exposés of the shoddiness and bias of the IPCC UN report to the point where there's talk of taking back its Nobel Prize. Glancing at the comments threads of Warmist organs like the Guardian and the BBC, it seems that hardly anyone defends Warmism any more. Instead of priests intoning 'settled science', 'overwhelming consensus' and 'peer review' there's an overwhelming consensus that climate scientists and climate journalists were driven by:
No comments: