Faithful to its traditions the New York Times has this long story about McCain's youngest son, Jimmy, just returned from serving in Iraq in the Marines. The piece is lightly smeared with glosses to slime the Times' worldview over a young man's service, but the net effect is a compelling case for McCain, his family and the war in Iraq. Here's the rub:

Out of the Public Eye

Mr. McCain has largely maintained a code of silence about his son, now a lance corporal, making only fleeting references to him in public both to protect him from becoming a prize target and avoid exploiting his service for political gain, according to friends. At the few campaign events where Lance Corporal McCain appeared last year, he was not introduced.

The McCains declined to be interviewed for this article, which the campaign requested not be published. “The McCain campaign objects strongly to this intrusion into the privacy of Senator McCain’s son,” Steve Schmidt, a campaign spokesman, said...

Do the Sulzbergers have children?
No comments:

The view from my room 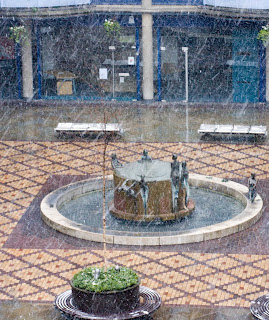 This is London now, but the white specks don't come from pigeons.

Oh well, there's snow business like global warming, I scoff not only because it isn't warming, nor because warming has not plausibly been shown to be man made, nor because the lingo shifts around, nor because it's brought to you by the same types who've turned science into dogma (y2k, hiv/aids, global cooling...), but because they don't act like people who are seeking the truth, sure of the science or experienced in risk. They act like a coalition of professionals conspiring against the laerty, priests imposing dogma on heretics, Dems pleasuring themselves by taking my money to dole out to their clients, and liberal fascists thrilled by coercion and thought-control. The irony is that I'd be glad were London or NYC to become emission free cycle zones for health, aesthetic and economic reasons - save for the agenda behind it.

The wished outcome may come out by informed consent, but that won't fill the religion hole that aligns modern elites to modern superstitions like iron filings in a magnetic field.
No comments: