He was nearly Commander-In-Chief :

Kramnik drinks a lot of water and likes to stretch his long legs. At first each player had private restrooms. Topalov was getting beaten and his manager accused Kramnik of too many pit-stops implying that he was cheating in the bog - eg receiving messages, using a computer - as the bogs were the only unsurveyed environment.

FIDE, the ruling body, then changed the arrangement to a common bog/restroom/signals centre. VK protested, didn't turn up for game 5, forfeited, appealed, lost the appeal, theatened to sue, blah blah.

Since then Topalov's manager has drawn attention to a high correlation between VK's moves and Fritz the Computer's preferences. Baldly stated this has no significance other than gamesmanship.

Pretty much everyone thinks Kramnik is in the right.

The history of World Chess Championships is Pythonesque to a fault and it's splendid that the traditional mix of genius and puerility is being carried on by a new generation. Naturally the Prime Minister of Bulgaria is involved, but where is Borat of Kazakhstan ? Unless....

Speaking of comedy, if there are any chess-playing readers in Moab, Utah who'd like a few skittles games next week, I'll be there with my manager and his manager.
No comments:

While you are throwing out your toothpaste from hand baggage for your next flight to and from the UK, you may care to reflect on this : 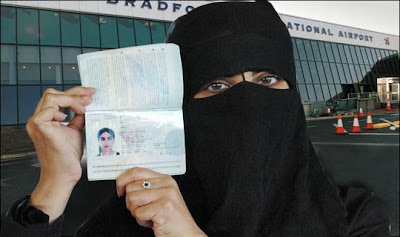 Anila Baig, a columnist on The Sun newspaper, reported that at Leeds-Bradford airport no member of security had asked her to remove her niqab to check her identity against her passport picture.
No comments:

There's less buzz about flat tax these days, so let me make a modest proposal:

What is called "flat tax" is really "less progressive tax." Ignoring the fiddly bits like thresholds, if I earn 100k and you earn 50k, I pay twice as much tax as you, for no good reason except that you have a vote worth as much as mine (more if your vote is thought more biddable).

"Flat tax" should mean we pay the same tax. That would be a glorious revolution.

The only enforcement need be a public list of those who've paid the tax, a strong sanction if you think about it.

For a lively essay on what I call "flat slope tax" see The Economist.
No comments: