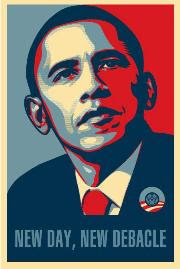 Charles Freeman, an anti-Israel Hezbollah apologist with financial ties to the Saudi government and the Chinese government was nominated to head the National Intelligence Council. Obama's not to blame as Freeman was nominated by someone who reports to Obama. Obama is only the ceo. Then Freeman withdrew in the face of Senate opposition, blaming the Israel lobby. The immediate scandal is that Obama's 2nd tier appointments are a disgrace. The long-run scandal is that this Obaman rabble have fubarred everything they've touched. Has anything been well executed? Anything? The head of Britain's civil service says of his US counterparts that:

Downing Street was finding it "unbelievably difficult" to plan for next month's G20 summit in London because of problems tracking down senior figures in the US administration. "There is nobody there. You cannot believe how difficult it is,"

Fifty days after President Obama was sworn in, every senior post in the US Treasury Department remains vacant, with the exception of Timothy Geithner as Treasury Secretary, who should have 17 deputies.

In Buffett's phrase this is America's economic Pearl Harbour and the metaphorical war is being commanded by a Harvard Law Graduate who has never run anything. What will happen when He and his tenured turnips face a non-metaphorical war? America has the finest military it's ever had run by a matinée idol without so much as a cub scout's badge. Whoops, there goes Tel Aviv. Whoops, there goes Delhi. Whoops, there goes Seoul. Whoops Apocalypse. It's hard to credit the nightmare and farce we're living thru. Obama makes Biden look presidential. Et tu, Newsweek ?

Caption your own Obama poster here.
No comments: