''Shard reaches for the sky amid office sector gloom" 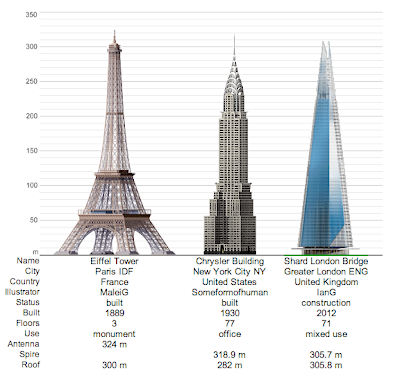 Construction of western Europe's tallest building will begin in London today amid the gloomiest market for commercial building in decades, thanks to backing from a group of Qatari banks.

Designed by Renzo Piano, the Shard of Glass will tower 1,016ft above London Bridge station and stand nearly three times as high as St Paul's Cathedral.

In this flat schematic The Eiffel Tower looks magnificent alongside The Shard and The Chrysler Building, but look at this video (again) for an impression of how the Shard will enhance London. Qudos to the Qataris for appreciating that a trough in the market is a less risky time to build.

The Russia Tower project, the competition for tallest building in 'Europe', is frozen, likely cancelled. London will certainly recover thanks to its diverse advantages, such as distance from capricious dictators, but Moscow is a bigger risk.

A deeper risk than the economic cycle is 'What is the point of commercial office space anyway?' Virtual office space is cheaper, more malleable, more interconnected, cuts out commuting ('Man was born free but everywhere is in trains'), and is in some ways more 'present', meaning communication is simpler and more configurable.  The argument about energy revolves around questions like 'Is it green?', 'Should we live sparser lives?', ' Will oil run out?', and so on, but the issue may simply become moot by adopting the virtual office as the norm.  Half our journeys would vanish, both local commutes and long-distance business travel. If a flat-screen isn't 'present' enough, well just beam me up in 3d and I'll join you round a virtual conference table in a virtual corporate HQ.
No comments: