This has been a low, dishonest year in American politics. To Nile Gardiner's neat ranking of Obama's 10 worst foreign policy blunders, I'd add this shining turd of appeasement - cancelling his meeting with the Dalai Lama 'to keep China happy'. 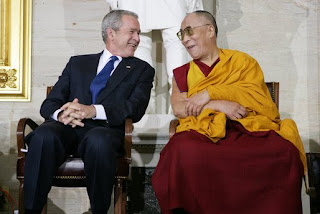 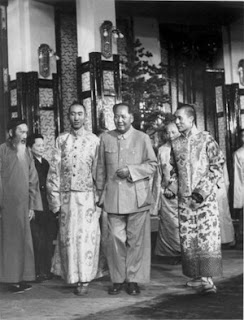 4. In 2008 candidate Obama told President Bush to boycott the Beijing Olympics opening ceremony to protest China's repression in Tibet.
5. So did Hillary Clinton, the current SecState.
6. Nine other Presidents met the DL.
7. Tibetan patriots in Chinese jails are betrayed.
8. Iran's tyrants are emboldened and Iran's dissidents weakened.
9. It's a disgrace to America.
10 The DL has the Nobel Peace Prize.


When I was researching for a little talk about Sherpas which I gave this afternoon to my daughter's 3rd grade class in NJ, I came across this 1950's shot of the DL (on the right) with Mao before the 1959 clamp down and the DL's flight from Tibet.
1 comment: