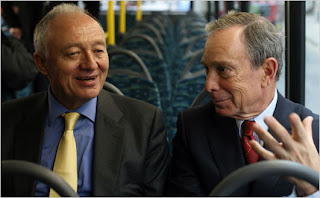 ..consultants at McKinsey & Company released a report in January, which argued that the tough regulatory environment in the United States was driving private equity and initial public offerings across the Atlantic. But this morning .... Mayor Michael R. Bloomberg — fresh from a visit to England, during which he stayed at his London apartment...

I doubt if 'Red Ken' Livingstone, the execrable Mayor of London, has an apartment in New York, tho possibly in Caracas or Havana. By the way the jew Bloomberg might reflect on Livingstone's notorious anti-semitism and Islamofascistophilia.

Anyone who alleges that NYC is the centre of the world is stuck in a time warp. It's London. Reasons why: time-zone, globalization of the US economy, immigrant energy, tax-breaks for non-residents, Russian and Indian billionaires, Sarbanes-Oxley. Polish accents are everywhere, but so are American accents and French and German and Russian and,and. NYC is the financial hub of America in America, but London is the financial hub of America in the world. London is still creating a new past. NYC is maintaining its old past. Having grown up in London I'd say it's the best of times now especially in the East End. I'll give myself a break by flying to Newark on Monday for a couple of months in the boonies of NYC and environs.

This must have provoked Mayor Bloomberg whose lackey wrote (from London) the next day:

Whenever the media pick up on a trend in financial markets, it is usually much too late.

This month, the New York Times ran a long article explaining how New York had surrendered its status as the world's financial center to London.

Right on schedule, the very opposite appears to be true.

After at least five years during which London pulled ahead as a finance hub, several catastrophic mistakes by the British capital are about to put that into reverse.

London has blown its lead. The way is now clear for New York to stage a recovery.

There is little question that London enjoyed higher status..

Actually I agree with Lynn's underlying thesis that London's status is undermined by the government's incompetence, but today the FT reports that Mayor B, Hank Paulson et al realise that it's not a zero-sum game:

He said: “’London versus New York’ is often how the show is billed - but the real game is ’efficiency versus economic drag’....“Clearly if we are to get deeply liquid markets, we need to be as joined up as possible and that will help in engaging with and indeed helping the markets in Mumbai, Shanghai or Hong Kong,”

"Engaging with and indeed helping" is snotspeak for "undermining".

A little lateral thinking yields a plan: let New York City secede from the USA and thrive as part of NyLon Inc, UK plc, a binary city of colossal financial might. New Yorkers would be rid of the hated Bush and the threat of a conservative successor. They could taste the rancid fruit of social democracy and depraved culture that most of them vote for AND the money fruit of barrow-boy capitalism. It would be a good deal for the rest of America too ..... if you insist we'll hold our nose and take Hillary in the package. She can be Queen.

For a complementary view see 'New York, not my kind of town'.
No comments: