Simplify the nomination to McCain or Romney, then, absent other data, Romney's chance of winning both races is 2-1 against, but a bookie needs an edge so should offer worse odds, eg Hillary is offered at evens. The odds against Romney, then, seem way out of whack, unless you believe McCain is the front-runner (I don't...no base,less money,old age) or that Giuliani stands a chance (I don't...no fire, no money) or that a Democrat would be favoured in the General Election (I don't...Romney would humiliate Hillary or Obama on Presidentiality and policy, especially Iraq).

Now there is definitely a slug of wishful thinking in my opinions. I shudder at the thought of McCain, Hillary or Obama as President and admire Romney, but, as a wizened speculator, I'm used to allowing for my own biases and building in surplus odds to overcome them. Even at 6-1, this is one seriously mispriced bet. My theory is that the MSM have belittled Romney as both a conscious and sub-conscious enactment of their own biases and fears and their mood music has wafted into the ear of 'experts' and out the other ear into the shell-like of betters and bookies. My bet exploits that pathology. Long live conventional wisdom!
No comments:

The train is about to depart..all aboard 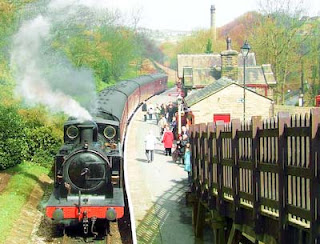 Mitt Romney (winner): Mitt was very good tonight. He got off the best lines, said a lot of things that were pleasing to the conservative ear, emphasized that he was an outsider, and fortunately he didn't get beaten up a lot (He's not very good on the defensive). This was a very good debate for Mitt Romney in a crucial debate, before what looks to be a very close Florida election.