Brown brown-nosed by Brown, steps in doo-doo, wipes his shoe

There have been high hopes in the media that the new UK Prime Minister will distance himself from the Bush regime not least to validate the idea that the UK was poodlificated by a Blair/Bush Christianist cabal. The atrocious appointment of Mark Pilloch Brown, snobby disdainer of flyover America, as a junior minister in the Foreign Office is hard to read except as a prelude to multilateralism - ie outsourcing Britain's interests to the UN's unelected Wise Fathers ... like Malloch Brown himself in fact.

Well....Brown (Gordon of that ilk, not Pilloch) says this ahead of today's meeting with Bush:

we should acknowledge the debt the world owes to the United States for its leadership in this fight against international terrorism.

Would any Democrat say that of their own country or their own military?

David Miliband, the new Foreign Secretary, publicly reprimanded Lord Malloch Brown, stating: "He's been given a very specific job to do by Gordon Brown, he's been asked to work on Africa, on Asia and on UN reform."

Maybe Brown (Gordon) was simply untuned to the repulsive vibe of Brown (Lord Pilloch) after years of being sucked up to by him as UN Deputy Secretary General and just made a mistake.
No comments:

The next Mayor of London?

Ken Livingstone is Mayor of London. He's a good operator with a tough political temperament and atrocious views. He's an Islamist/IRA fellow traveller whose enemy is America and whose enemy's enemy is his friend; Chavez, say. The low turnout for mayoral elections and block voting of Muslims and other identity groups have won him 2 elections. The Conservative candidate just announced to fight 'Red Ken' is Boris Johnson. He stands a chance thanks to his high profile and likable style. At least I like it, judge for yourself: 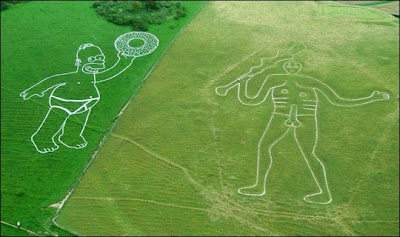 "Wanna play toss the hoop or are you just pleased to see me?"
1 comment:

From an article by Niall Ferguson this is neat:

The rest is big-governmentitis written by a twit.

Interesting how little effect the credit events are having.
Non 'subprime' US property is down because of 'irrational exuberance' and easy money on the way up yet the US economy is thriving and will benefit from more affordable housing. CMOs and other real estate financial packaging have dispersed risk more widely than in the past. Bearstearns isn't bust, but so what if it were ? Meanwhile the stock market is at record highs and the US's vast foreign debt is growing smaller by the day as the dollar depreciates.

Actually the financial sophisticates in the subprime sector are often the borrowers - "These dumb white guys in suits want to throw money at me and, if things work out, in 2 years I'll have a house worth more, maybe much more, than it cost. If they don't work out, I'll be foreclosed and the smart money-men will own a house worth less, maybe much less, than it cost."
No comments: