The be-medalled one on the right has never seen combat. The lapel-pinned one on the left, saluting like a pro, has never been in the military, but he has been a community organizer and commander-in-chief. He has views on lapel pins like the one he's wearing today at the D-Day celebrations:

Shortly after 9/11, particularly because as we're talking about the Iraq war, that became a substitute for I think true patriotism, which is speaking out on issues that are of importance to our national security. I decided I won't wear that pin on my chest.

These folk are phonies of course, but there was one real person who wasn't invited, someone who did serve in WWII, Queen Elizabeth II. She wasn't invited because Sarkozy wanted the D-Day anniversary to be a Sarkozy-Obama event and Brown didn't want to be upstaged. Prince Charles was a last minute insertion as the British public became scandalized. This phoney-fest was memorable however. British veterans booed Gordon Brown:

The veterans booed him because it is thought that Downing Street encouraged Sarkozy to not invite the Queen so that he could get another photo-op with Obama. The Obama obsession seems evidenced by the Prime Mentalist’s renaming of ‘Omaha beach’ to ‘Obama beach'

Gordon Brown is a dead man walking in British politics and it's possible that today will be the last straw for the cowardly, callow, careerists who have been running my country for the last 12 years, so that they finally defenestrate him.
No comments:

Click on London-SE1 for a tableau in front of Tower Bridge and St Paul's: 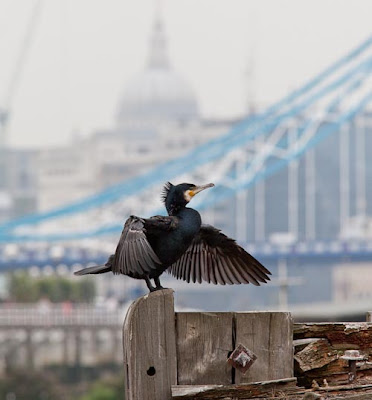 In the last few days the yield on US government debt has risen dramatically. Lenders are reluctant. Today the decline in the value of the dollar accelerates as gold, oil and Sterling surge up. The US has 4-8-12 more years of Harvard Law School economics to endure, whereas the UK government will be replaced within a year by the Conservatives. So while the credit agencies put the UK on credit watch with negative implications but re-affirm the US as triple-A, the markets realize that in the UK there's hope for change whereas in the US there's Hope and Change. Some difference.

I've queried America's credit worthiness for a while, eg "A trillion here, a trillion there..." , but I'm not as polite as the Chinese:

Another global financial crisis triggered by a loss of confidence in the dollar may be inevitable unless the U.S. saves more, said Yu Yongding, a former Chinese central bank adviser.

It’s “very natural” for the world to be concerned about the U.S. government’s spending and planned record fiscal deficit, Yu said in e-mailed comments yesterday relating to a visit to Beijing by U.S. Treasury Secretary Timothy Geithner.

The Obama administration aims to reduce the fiscal deficit to “roughly” 3 percent of gross domestic product from a projected 12.9 percent this year, Geithner reaffirmed today. The treasury secretary added that China’s investments in U.S. financial assets are very safe, and that the Obama administration is committed to a strong dollar.

It may be helpful if “Geithner can show us some arithmetic,” said Yu. “We need to know how the U.S. government can achieve this objective.”

The deficit is projected to reach $1.75 trillion in the year ending Sept. 30 from last year’s $455 billion shortfall, according to the Congressional Budget Office.

By happy chance today GM files for bankruptcy, but will be kept afloat with money borrowed from China to be repaid by our children to the advantage of the UAW and the disadvantage of Americans who work for Ford, Honda, Toyota.
No comments: