The dead parrots are breeding


“Investors had always regarded the euro as a de jure German mark,……It’s dawning on the world that it is becoming, de facto, a Greek drachma.”


Club Med governments have built up €7 trillion sovereign debt under the cover of monetary union, which shut down the warning signals for borrowers and creditors alike.


...no British government can ever put Europe on the back-burner and hope it goes away. It hits you in the face, again, and again, and again. This is why so many British ministers end up feeling a visceral hatred for the project.
In my view, the EU elites overstepped the line by ignoring the rejection of the European Constitution by French and Dutch voters, then pushing it through under the guise of the Lisbon Treaty without a popular vote, except in Ireland, and when Ireland voted ‘No’, to ignore that too. The enterprise has become illegitimate – it is starting to exhibit the reflexes of tyranny.
The moment of definition is fast arriving from Britain. The measures now being demanded to save monetary union cannot and will not be accepted by this Government, Nick Clegg notwithstanding. The most eurosceptic people I have ever met are those who have actually worked for the European Commission, though it takes a while – and liberation from Brussels – for these views to ferment.
The outcome – une véritable gouvernement économique – will put Britain and the eurozone on such separate courses that it will amount to separation in all but name. The sooner we get the nastiness of divorce behind us, the better.


"Sarkozy ended up banging his fist on the table and threatening to leave the euro...This forced Angela Merkel to give in and reach an agreement."
The European Union and International Monetary Fund agreed a 110 billion euro rescue plan for Greece last week. But Germany, which must shoulder a good deal of the burden, had proven reluctant to commit itself to a plan.
Zapatero told his party members that France, Italy and Spain had formed a united front against Germany at the Brussels meeting and that Sarkozy had threatened to break up a traditional France-Germany "hold" on the rest of Europe

Meanwhile the dollar continues its secular decline against gold. The full faith and credit of the United States is less trustworthy than the dream metal of imaginary value. 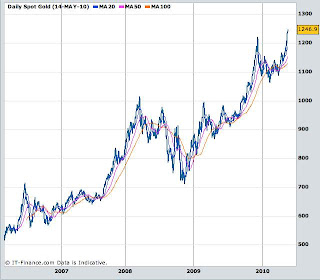 The USA faces the same problems as Greece says the Bank of England:


...dealing with a banking crisis was difficult enough, but at least there were public sector balance sheets onto which the problems could be moved.
Once you move into the sphere of concerns about sovereign debt, there is no answer; there’s no backstop. And it is very important therefore that we hit these problems on the head now, put in place credible solutions to prevent the problems becoming worse.
And I detected at the weekend, in the conversations that I spent hours listening to on the telephone, that this sense of the need to work together was there again….
It is absolutely vital, absolutely vital, for governments to get on top of this problem. We cannot afford to allow concerns about sovereign debt to spread into a wider crisis dealing with sovereign debt. Dealing with a banking crisis was bad enough. This would be worse.

Well, that's nice. What then must we do? Raise taxes? Make "the rich" or banks or "speculators" top up the ludicrous pay, pensions and benefits of the public sector client class…legalised theft. But that induces contrary outcomes anyway as tax on the tapped out gets avoided and enterprise shrivels in the face of state theft. There's only one answer - shrink the state big time.