Go with the glow - photo notes from around Shad Thames 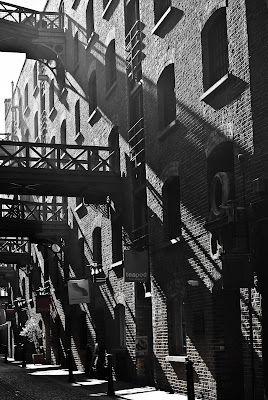 Shad Thames is a small neighbourhood by the south side of Tower Bridge in London. This post is parochial, but it gives me the chance to publicise my photography.

These notes are illustrated in this gallery

In Shad Thames the sloping balconies stack up at mad angles to sensational effect. Still, it's not trivial to make a decent image. The light is typically unyielding, either overcast and undifferentiated or high contrast such that the dynamic range from the dark, narrow canyon to the bright,white top of Butlers Wharf exceeds what a camera can handle without High Dynamic Range techniques which look surreal. Go with the glow; shoot backlit effects with light seeping round the metal balconies. This is effective while the morning sun casts long shadows of the balconies onto the side walls of the canyon, first one wall then the other. In between the sun shines straight down the canyon, floodlighting the balconies and some of the street furniture. There's often a cluster of Biffa bins at the Curlew Street corner at that time. They're incandescent in the sun. When a trashtruck moves up the street, it slots in nicely beneath the stacked up balconies. Don't forget the brightly coloured jackets of the parking wardens.
Tower Bridge is a visual cliché, dramatic skies notwithstanding. Stepping down onto the shingle by the river at low tide helps. The scaffolding on the bridge while it's being cleaned gives new possibilities. Moving towards Rotherhithe yields busy images which appeal to me. Or buy an upper floor flat for a million quid for a less usual viewpoint. Interesting boats pass through the raised road often enough - timetable here.

Birds are good round here; swans, grebes, coots, ducks, gulls, geese, even a Harris hawk to amaze the pigeons. Cormorants may look black, but they're black and white and irridescent when you get a good view and they have strange heads. They often present themselves perched on a highly textured beam or a yellow buoy, drying their wings like laundry on a line since they lack oil on their feathers. You can catch them juxtaposed with City Hall or the bridge or a police launch or some other artefact which they sneer at or harangue. Pigeons are more handsome than you might think - bright eyes, handsome feathers, fluffed up for sex or bathing or both. It helps their interesting personalities that they are the next stage up from humans on the re-incarnation ladder; like us, but less litter.

More London estate has a reputation for harrassing photographers shooting the world-famous icons around, but I think it's unfair to call the security staff 'Morons' just because it sounds apt. Some of them, often African, are perfectly polite and smiley. Others, unfortunately, start citing laws they know nothing about and which don't apply and that makes it harder to kowtow to what amounts to a breach of the peace when they try to obstruct innocent photography. One might simply snap one of these surly actors if they refuse to get out of the frame; instead of the standard Tower Bridge shot, Tower Bridge + surly security guard.

'Hell is other people' may apply now that Shad Thames is so busy. You can aim high or crop out specks of lumpen humanity from the bottom of the frame. It often works to include the odd person for scale or clothing or as an objet trouvé. My shot of The Navigator in Hays Galleria was enhanced by the intrusion of a tourist who looked like the model for the nasally endowed sculpture. A winter shot of the anchor by The Cantina was enhanced by a bloke giving scale alongside. A few seconds later a man in a top hat came striding through the snow and gave me a striking image looking back to the bridge.

Reflections are a treat around the More estate. It can be a puzzle finding just the right spot to optimise a multiple image of City Hall. That's when I look most like a terrorist casing the joint. Don't forget that rain begets reflections. La Strada has fascinating reflections of City Hall and the bridge combined with the restaurant's signage and the big red lampshades inside.

Again here's a link to a gallery of mine which shows several of these points.I've posted smallish files for faster download, so the images have a slightly stressed quality rather than the more 'liquid' surface I prefer.
No comments: