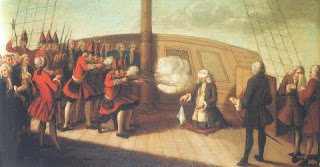 In this country, it is wise to kill an admiral from time to time to encourage the others - Voltaire, Candide.

Voltaire refers to the execution of John Byng, Admiral of the Royal Navy, in 1757 for "failing to do his utmost" to engage the enemy, the French. 1 month ago on the 250th anniversary of Byng's death the Ministry of Defence refused a posthumous pardon petition from Byng's descendants. There is a view that Byng's death was unjust, but...

there was more truth in [Voltaire's] epigram than perhaps he knew, for the execution of Byng had a profound effect on the moral climate of the navy … the fate of Byng taught [officers] that even the most powerful political friends might not save an officer who failed to fight. Many things might go wrong with an attack on the enemy, but the only fatal error was not to risk it. Byng's death revived and reinforced a culture of aggressive determination which set British officers apart from their foreign contemporaries, and which in time gave them a steadily mounting psychological ascendancy. More and more in the course of the century, and for long afterwards, British officers encountered opponents who expected to be attacked, and more than half expected to be beaten - NAM Rodger, A Naval History of Britain.

I sentence the Minister of Defence, the First Sea Lord and the commander of HMS Cornwall, to be besuited by an Iranian tailor and be taken from this place to the quarterdeck of HMS Cornwall, which shall be berthed by Tower Bridge to permit spectators to pelt them with rotten vegetables, and then be executed by a firing squad of Royal Marines. The bodies shall be gibbeted from a gallows at Wapping to be washed over by 3 tides pour encourager les autres.
No comments: