A parliament of scarecrows

Working for the American people

The stock market has dropped 5% in the last 3 days, confounding expectations that Tuesday's GOP win in Massachusetts would send stocks up. I'm unfazed at the down move anyway as a species of 'buy the rumour, sell the confirmation', but the drop is generally blamed on Obama's Wednesday announcement of a hot war on Wall Street banks. The specifics aren't there yet, but the general drift is to prevent proprietary trading by banks and to spend time between now and election day in November demonizing bankers. I'll pass over Obama's economic illiteracy, but here's one take in the FT:

Worse, most people do not think Mr Obama can even command unity within his own administration on the Wall Street proposals amid growing speculation about whether Tim Geithner, the Treasury secretary, can survive in his job. Mr Geithner was conspicuously sidelined during Thursday’s announcement by the presence of Paul Volcker, the former Federal Reserve chairman, who lent his name to the push to rein in Wall Street banks.

The speculation about Mr Geithner is only likely to grow. “The Obama proposals were clearly politically motivated and came from the White House not the Treasury,” says a Democratic adviser to the administration, who withheld his name. 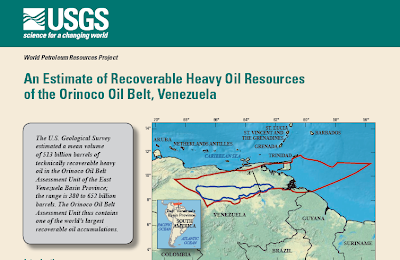 The US Geological Survey has re-assessed Venezuela's recoverable oil reserves in the Orinoco Belt. Apparently they're twice as high as we thought and total more than Saudi Arabia. This is heavy oil that's expensive to produce and treat, but so what? Orinoco oil has much better recovery rates than Canadian heavy oil which is flowing profitably, it's shallow, it's onshore and the USGS review uses current technology and geo-knowledge. At the present price of $75/barrel it's highly economic. If prices drop to make it uneconomic, then by definition we have plenty of oil anyway and the lower prices tend to incentivise cheaper processes. Such vast reserves in America's backyard can be added to Canada, Brazil and the terrific potential for deep drilling in the Gulf of Mexico + other dramatic oil and gas discoveries in recent years. You could cut the USGS figure by 2/3 and still have ABUNDANCE.

So what could go wrong? There's Chavez, there's Latin-American disfunctional nationalism like Mexico's woeful underperformance since nationalising it's oil industry in 1938, or the Church of Anthropogenic Global Warming might proscribe heavy oil or just oil in general, above all there's the stupidity and cowardice of the Harvard Faculty Club junta in America.

Meanwhile Iran's nukes are imminent and Venezuela would be the ideal first stop to proliferate and test American will. While Obama is preening about his base's right to 'health care' and abjectly begging China and Russia for sanctions on Iran and N.Korea as a fig leaf for an actual defence policy, the world's political tectonic plates are shifting. There's an earthquake coming and America's unpreparedness and lack of spine will kill a lot of people. What will happen when Chavez announces he has a nuke and Obama had better shape up? Will the Director of National Intelligence go 'Duh!' and smack his forehead? 'We'll do better next time.' Odd's bodikins, what a shower of fuckwits!

Anyway price and politics will determine feasibility of extraction...just like on the Alaskan North Slope....and remember, 'peak oil = peak technology'.
No comments: