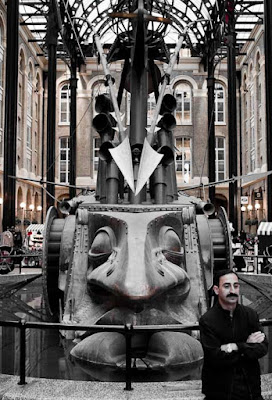 I'm collating a book of images from around Shad Thames in London. In a converted warehouse nearby called Hay's Galleria there's a statue called The Navigators by artist David Kemp. I was composing a shot of this work when a tourist came into the frame and wouldn't budge. Eventually I took the snap with him in it. When I saw the image on screen I realised that the interloper resembled the sculpture, so I conversed a little with David Kemp about it. During the banter we discovered a certain shared affinity for cormorants and he drew my attention to this ditty by Christopher Isherwood, also attributed to Edward Lear:

The Common Cormorant
The common cormorant (or shag)
Lays eggs inside a paper bag,
You follow the idea, no doubt?
It's to keep the lightning out.

But what these unobservant birds
Have never thought of, is that herds
Of wandering bears might come with buns
And steal the bags to hold the crumbs.