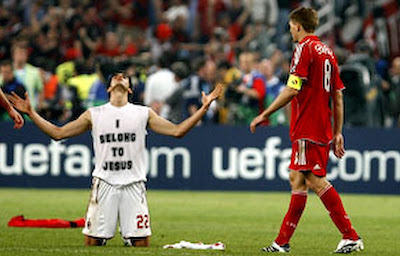 The game was Wednesday's European Cup Final when AC Milan beat Liverpool 2-1. On the left is Kaka , the Brazilian now rated as the best player in the world. On the right is Steve Gerrard, the Liverpool captain, a great player and leader.

Kaka is an evangelical Christian. His lifestyle and virtues are impressive. I shudder at such people, but that may be the devil in me. I shudder more still at the religion of Atheism, so I'm glad that Kaka sticks it up 'em in this photo.
5 comments:

It's been obvious to me for a while that Romney will be the GOP nominee. All his trends are up, he wants it and he's competent. The more he's exposed, the more he impresses. He sounds like the real deal and seems to handle pressure well. Giuliani is the competition thanks to his tremendous name recognition, but he doesn't have the desire and his cloudiness on abortion, immigration and other social issues dilutes his image as a forceful executive. McCain is frankly despised. So that's that.

Gore is waiting to be drafted with loving kisses and adoration and that will happen when it becomes clear that both H.Clinton and Obama are unelectable versus Giuliani or Romney. In dangerous times executive achievement trumps vapid socialism and bs about gender or race. Gore has zero executive achievement, but sounds like he does, at least against the insubstantiality of Clinton and Obama. He's electable and the serious liberals want and need the Presidency very badly now. Ergo they'll draft him.

So Romney v Gore it will be. Note that Gore will have Steve Jobs on his side. That may be pretty influential with young voters. Jobs has earnt credibility in a way that the Hollywood airheads have not. It will be a formidable clash. I'd back Romney just because he's right on the issues and is good in debate plus he has the good humour to gore Gore.

UPDATE: Obama and Clinton give a 360 degree demo of their Presidential demeanour (if 'Presidential' means 'cockroach') by their vote on troop-funding and the manner of it:

Both Clinton and Obama had remained publicly uncommitted in the hours before the vote. Neither were on the Senate floor as voting began. Halfway through, Obama walked into the chamber and cast his "no" vote. Clinton did the same a few minutes later.

AFTERTHOUGHT: I realise I've ignored John Edwards, but the man's a clown's clown, yea he beclowns himself in new ways. Kerry's ex-campaign manager's repellent story that Edwards told Kerry twice the same story about lying (the right word) on his dead son's slab at the funeral home prefaced by saying that he had never told anyone else - that witnesses the ambulance chasing, tort lawyering, gay-queasy, silky phony's unelectability. The netroots may like his stances, but their motive is to capture the Party rather than win elections.
No comments: