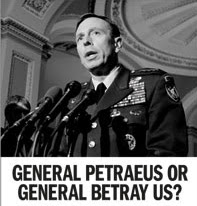 The "General Betray Us" ad in the New York Times brings all this War on Terror stuff into perspective. Could any conservative invent a more satisfying branding iron for the Democrats? Alright the liberal congress only called Petraeus a liar not a traitor, but I think the job's done. Thankyou, God.
As for the Times, see Thomas Lifson: 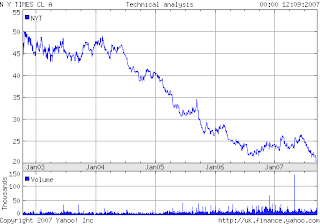 Even Pinch Sulzberger must, by this time, understand that the newspaper industry is dying. But a canny strategist could, as Rupert Murdoch is doing, leverage assets like a famous name and a national distribution platform into a multi-media platform that could thrive in the new technological environment of news. Despite the ineptness of the company's diversification strategy, the venerable brand name and worldwide reputation of the paper, a legacy he inherited from his ancestors, remains the company's most valuable asset. But this sort of cheapening of the company's standing, publishing scandalously scurrilous ads and devoting its diminishing supply of space to redundant stories with attitude, is undermining the remaining value of that brand.

Unless members of the Sulzberger/Ochs family decide to protect their patrimony by removing their incompetent cousin, something of a Greek tragedy will play itself out at the company, and it will be devoured by Pinch's lethal combination of hubris, youthful political obsessions, and lack of business acumen.