..and Cheney! If appreciation of Bush, especially in contrast to Obama, becomes 'gay' liturgy, then the ground is moving. The comments here are as revealing as this post:

November 11, 2009 at 9:03 am
Well stated guys. I am growing ever fonder of old W the longer Bean Pole and Ms. Bitchy occupy his old Pennsylvannia Ave. diggs. It was pretty disturbing to watch how the MSM and the uber liberal banshees would malign W every chance they got. Now to watch them disembowel themselves every time someone criticizes the latest zOmbie policy makes me quiver with laughter. GWB had the courage of his convictions. We may not have always agreed with everything he did, but here was a president who didn’t gauge his every move by opinion polls or party politics. He was unfairly blamed for many things not under his control. I lived in New Orleans during Katrina and know full well most of the inaction and stupidity that caused widespread heartache could definitvely be laid on the doorstep of Blanco and Nagin. ( two matching pieces of wet toast if there ever was a set ) W has been nothing but a class act especially since his retirement. I roared with approval over a recent article entitled “What if George Bush had done this”. OMG talk about hitting the ole nail squarely on its head. Made me want to glue a copy of the article onto closet case Anderson Cooper’s forehead and give him some real 360. Thank you Mr. President & Laura for the visit to Ft. Hood, for your caring, concern and constant nobility.

November 11, 2009 at 9:25 am
What a great article you have written. When Bush grabbed the bullhorn and made those comments at the WTO, with his arm around the fireman…it was a great moment.

The Fireman actually teared up too.

I had differences with Bush on somethings, and I believe our soldiers gave him much respect…something I doubt is happening now with Obama.

I truly believe Obama doesn’t like the military and you don’t see any emotion from him when he talks about them….the only emotion you see from him, is when he speaks to ACORN & SEIU!

I feel for those soldiers that have to fight under him!

Bush & Laura actually showed their compassion, without having cameras around all the time.

I join you in thanking them.

November 11, 2009 at 9:28 am
After loathing George Bush and Dick Cheney for so long, I am realising how wrong I was about this man, especially when compared to the America-loathing Marxist-in-chief in the WH now.
Same for Dick Cheney, couldn’t stand the man, now I realise he did everything he had to do to keep this country safe.

I cannot believe how the MSM misrepresents everything, I used to listen to them, watch them… here idiots like charlie gibson and george stenospous spout their opinions.. now, it has NO impact on my opinions of anything.
I saw this utter-bias reporting against Hillary and then against Sarah Palin. F U Brian williams and the rest of the MSM!! No one believes a word you say anymore!

Thank you to the Bushes for their caring, these are genuine Americans who love their country and the US military. God Bless them both.

As Obama scrupulously suspends judgement over the possible motive of the Fort Hood mass murderer, another enigma, the DC sniper, John Allen Muhammad, was gently put to sleep last night. He died peacefully, "calm and stoic, defiant to the end." His motives are a mystery too:

Answers to why he and a teenage accomplice methodically hunted people going about their daily chores, why he chose his victims, including a middle schooler on his way to class, and how many there were went to the grave with him.

Maybe there's a clue in the drawings of Muhammad's pupil assassin: 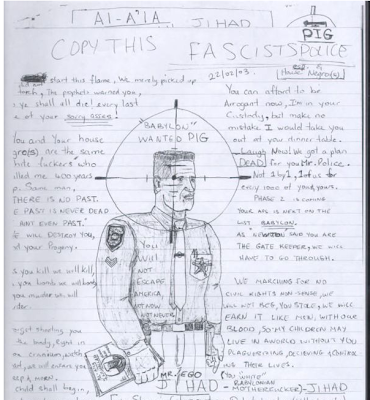 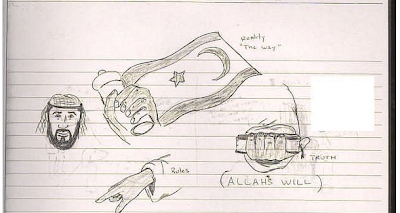 Muhammad was a member of Nation of Islam, whose head, Minister Louis Farrakhan points out:

if it were in fact a Black-White hate thing, why would he shoot five persons of color--one an Indian and four Blacks and one a child?

1. A principle motive was "Jihad", Islamist war on infidels. His accomplice says so and there's ample evidence in Muhammad's history.
2. Most of the media are lying about it thru suppressio veri, partly from motives of avoiding a backlash against innocent muslims, partly as reflexive propaganda to support a "social justice" narrative about who is victim, who is oppressor.
3. The US government, whose first duty is the safety of America, is lying about it to avoid having to discriminate against a thought system that wants to overthrow Western, Christian, Enlightenment inspired society in favour of Islam. That was so with Bush as well as Obama.
4. Obama is a special case. Tho he is a conscious socialist, his affinity to Islam is less direct. He is acculturated to Islam, the son of a muslim, the stepson of a muslim, educated in an Islamic school, fiercely supported by American muslims, especially Louis Farrakhan. Furthermore Obama is a product of the Frankfurt/Alinsky/Gramsci school of re-modelling human society. Islam and the Left apparently are antithetical, but actually are natural allies embodied in Barack Hussein Obama. They have the same goal - to command speech, thought and family life; and the same enemy - us.

More Ralph Peters - "At some point you just need to knock off the BS":
No comments: