It's a joy for it's own sake to to rehearse Jacques' "seven ages of man" speech from As You Like It, but do you notice an "age" which is missing?


All the world's a stage,
And all the men and women merely players;
They have their exits and their entrances,
And one man in his time plays many parts,
His acts being seven ages. At first, the infant,
Mewling and puking in the nurse's arms.
Then the whining schoolboy, with his satchel
And shining morning face, creeping like snail
Unwillingly to school. And then the lover,
Sighing like furnace, with a woeful ballad
Made to his mistress' eyebrow. Then a soldier,
Full of strange oaths and bearded like the pard,
Jealous in honor, sudden and quick in quarrel,
Seeking the bubble reputation
Even in the cannon's mouth. And then the justice,
In fair round belly with good capon lined,
With eyes severe and beard of formal cut,
Full of wise saws and modern instances;
And so he plays his part. The sixth age shifts
Into the lean and slippered pantaloon,
With spectacles on nose and pouch on side;
His youthful hose, well saved, a world too wide
For his shrunk shank, and his big manly voice,
Turning again toward childish treble, pipes
And whistles in his sound. Last scene of all,
That ends this strange eventful history,
Is second childishness and mere oblivion,
Sans teeth, sans eyes, sans taste, sans everything.

The age "missing" to a modern reader is the college years in which most literate and many illiterate young men and women loiter sheltered from adulthood; those years when Shakespeare migrated from Stratford to London, learnt to act, absorbed history useful to his craft such as Plutarch and Holinshed, was earning a living to support his baby and his elder wife, evolved his sensational soul .... those years are often spent in the second hand life of an immature full-time student with little life experience to bring to his study. The damage to a young man of deferred adulthood may never be repaired. Hom. sap. has evolved to assume life's risks and burdens in the years 12-25. Absent those trials, a young man may never grow up. He may become a community organizer or corporate drone or charity worker or Ed Miliband or ... It's a little different for girls, but I'll not dilute the theme by dealing with that here.

Apart from the spiritual atrophy of deferred adulthood, that lifestyle is increasingly bad business as laid out in this article in Forbes magazine:


The overwhelming cultural consensus of the post-WWII generation was that if you are middle-class, then you simply must own your own home and your children must go to college. Out of that cultural consensus emerged a complex system of tax breaks and special lending deals designed to make sure that the number of Americans who bought houses and bachelor's degrees was as high as possible--or maybe more so.

Bubbles arise in nature when some sort of film, bolstered by surface tension, contains a pocket of air under greater pressure than the general atmosphere. Bubbles arise in markets when some factor external to the market (usually tax engineering or a regulatory mandate) creates a pocket of concentrated capital in which asset prices rise well above levels that can be justified by the assets' underlying value.

So, the recipe for an asset bubble is one part social engineering, one part easy money.

Just for the frisson here are images of a recent student protest against an increase in fees. I suppose that this is displacement activity of young men thwarted in their drive to grow up, retards: 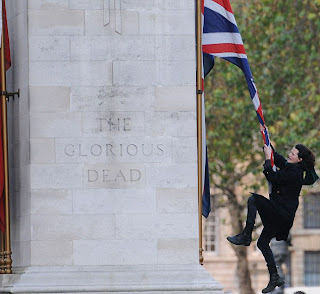 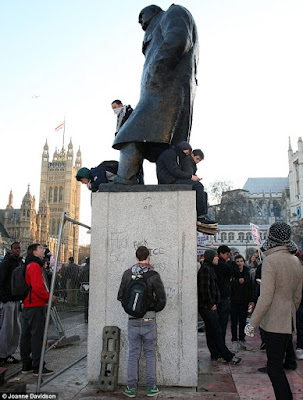