Things in heaven and earth 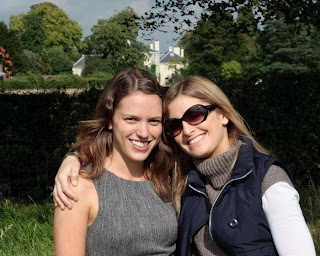 Here are 2 radiant young female primates. Would you say they were intelligently designed? I don't know, but another thinker on these matters had a stronger opinion:

"I am inclined to look at everything as resulting from designed laws, with the details, whether good or bad, left to the working out of what we may call chance."

"...the extreme difficulty or rather impossibility of conceiving this immense and wonderful universe, including man with his capacity of looking far backwards and far into futurity, as the result of blind chance or necessity. When thus reflecting I feel compelled to look to a First Cause having an intelligent mind in some degree analogous to that of man; and I deserve to be called a Theist."

"[a man] can be an ardent Theist and an evolutionist"... for himself, he had "never been an Atheist in the sense of denying the existence of a God". He added that "I think that generally (and more and more as I grow older), but not always, that an Agnostic would be a more correct description of my state of mind."

It is apparent that Charles Darwin hovered between Theism and Agnosticism, never touching Atheism but inclining towards Intelligent Design. Evolution (which convinces me) is considered evidence against ID, but not by Darwin.

The white house in the photo is Down House near London, where Darwin wrote The Origin of Species and The Descent of Man.
9 comments: