Making money out of misery 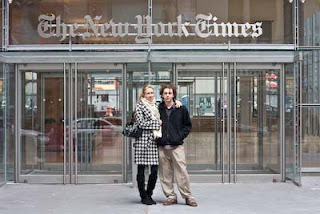 And that's why I've just bet that the New York Times' stock price will go up from $14.30 with a stop at $12.30. It's a 'catch a falling knife' kind of bet as can be seen from the graph. The NYT market cap. has been murdered since the invasion of Iraq, down more than 70%. 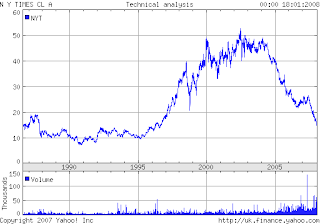 The Times has deep-seated negatives:

1. It is a lying, treacherous, cowardly, unlearning thing.
2. It has shallow pockets.
3. The Sulzberger family controls the voting stock.
4. New media like Craigslist are taking the Times' traditional revenue streams.
5. Rupert Murdoch's Wall Street Journal has the Times in its crosshairs.

But most of this is priced in. It also has positives:

1. The brand, which is mixed in with New York's brand. After all it is the leading paper of the leading country in the world. In other businesses that cachet could be worth billions.
2. The content: its site is very decent and much of its reporting is worthwhile. It's archive may be worth hundreds of millions.
3. The property: eg the new Renzo Piano HQ right opposite the Port Authority bus station and virtually on Times Square is probably the best recent skyscraper in America.
4. The equally ugly sister: I doubt the Boston Globe's value is less than zero.

Here's a nice piece of speculation that Google might buy the Times.
No comments:

Time to make the call

Mitt, good morning. Now's the time to call Fred. "Fred, I like your debate performance and your persona. We agree across the board on the broad strokes of policy. We're on the same side splitting the conservative vote. That risks Florida giving unstoppable momentum to your friend John. Then conservatism is finished for the foreseeable future. I want you on my side. What will it take?"
No comments: