Putting the grim in pilgrim 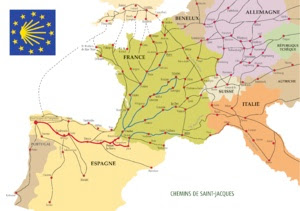 I recently spent a few days on the Way of St James, walking the stretch across the Pyrenees to Roncesvalles in Spain, the site of Roland's mythical last stand against the Moslems in 778 AD. I joined a soccer friend, Seth, and his friend, Greg, on their pilgrimage from London to Santiago de Compostella, site of the supposed remains of the apostle James, a fisherman who became a fisher of men.

The first day was a washout, more like snorkelling than walking, then the sun came out, the foothills of the Pyrenees cast their spell and we strode on. As pilgrims, 'pelerins', we received kindnesses along the way. Until we reached St Jean Pied de Port, where several routes converge before the push across the Pyrenees, our route from the north seemed hardly used by pilgrims and we were a little special. You can identify pilgrims by the scallop shell swinging from their sack or their broad-brimmed hats.

Greg is a damned liberal and I'm a damned conservative. He's just gained a first class degree in 'Developement Studies' and plans to take a Master's in 'Peace Studies' at SOAS, the infamous School of Oriental and African Studies in London. He's recently been in Palestine, mewling and puking over the oppressed Palestinians, and cares little for history prior to the start of 'de-colonization'. Any normal person would ostracize him or pelt him with rotten eggs. I relished the mental fight and the klicks (kilometers) flashed by unnoticed as we cudgelled each other with words up hill and down dale. I won all the arguments (you know the stuff: Hummers are greener than Hybrids; everyone should pay the same tax; no tax, no vote; the Palestinians are lucky to have the Israelis as enemies; American soldiers are heroes), but I rubbed it in by grinding his liberal arse to dust at chess. Greg, you've been mugged by a neocon and one day you'll be mugged by reality, but you're a good sport and I relished being baited back.

I'm invited to re-join them towards the end of the pilgrimage and I might, especially if they want to go the extra 90km to Cape Finisterre

Land's End/End of the World. This mythical promontory symbolizes for many pilgrims the end of the terrestrial way and the beginning of a spiritual renewal. It is the tradition of pilgrims who continue to cap Finisterre to burn their clothes and sandals as a sign of this renewal.


Note Sondheim's wince at the first slurring of 't's, but also his beautiful teaching style, his absorption with the potential of the lyric in its setting, his happiness at his pupil's success, his succinctness, his persistence to defeat the 2nd rate.

I'd also have asked the singer to improve 'careah' to 'career'. It's not at all that there's a proper way to speak or sing....there's an expressive way, an accurate way, a suggestive way... and before that happy state there is basic state of respect for words to be mastered and then riffed around. Mere slurring doesn't cut it.
No comments:

The religion of Me

John Hinderaker at Powerline critiques an interview with Christiane Amanpour about her new CNN series 'God's Warriors'. He refutes the equivalence of 'Jewish Warriors', 'Muslim Warriors' and 'Christian Warriors', but what I'd like to quote is this:

I think we can diagnose her perception of "fundamentalism" as follows: "fundamentalism" means religion-based beliefs that are antithetical to her own liberal views. Islamic "fundamentalism" is a serious danger in that it encourages terrorist violence that could kill her. The likelihood of that, however, is relatively remote. Christian (and Jewish) fundamentalism doesn't pose any such hazard, but the danger that it does pose is much more immediate: most such "fundamentalists" vote for and support political candidates with whom Amanpour disagrees.

The liberal condition is often a puzzle to me. Why would they not want America to beat the head-hackers? Why would they not want nuclear families to thrive? Why would they not admire men who voluntarily risk their lives to protect the rest of us? Why would they not want to protect unborn children? And so on...natural positions that harmonize with a compassionate outlook just don't appeal. This is why: they never grew up. They are fundamentalists of the religion of Me. Their own stimuli determine their worldview, but that worldview has self-regard at its centre so that infantile postures are dissimulated as rational stances - 'Choice' 'Diversity' 'Sexual Liberation' 'Women's Liberation' are code for 'Daddy can't tell me what to do' and Daddy is a more immediate threat than the enemy over the water. The unfunny part is that these permanent adolescents have votes. I would simply disenfranchise non-taxpayers as a starting point to a more adult society. Why should college students or other welfare recipients have a say in how much money another family should be forced to pay them? “Power without responsibility — the prerogative of the harlot throughout the ages.” Amend 'harlot' to 'liberal.'
No comments:

Let me scratch that

"I think it would be a profound mistake for us to use nuclear weapons in any circumstance" Obama said, with a pause, "involving civilians." Then he quickly added, "Let me scratch that. There's been no discussion of nuclear weapons. That's not on the table."

Together with his recent policy announcement to attack Pakistan if necessary to root out terrorists, this puts the USA in an interesting position vis-a-vis the only Islamic nuclear power.
No comments: