Here is a detail of the London Underground Map: 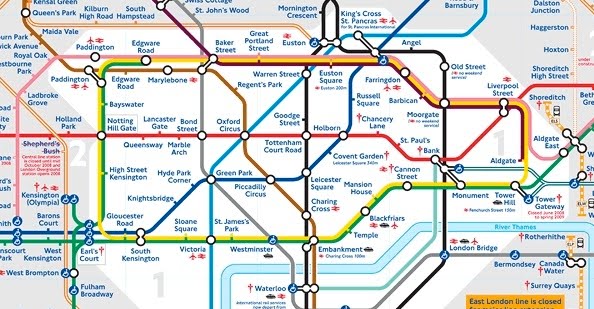 The yellow line is The Circle Line. And that gives rise to this story: 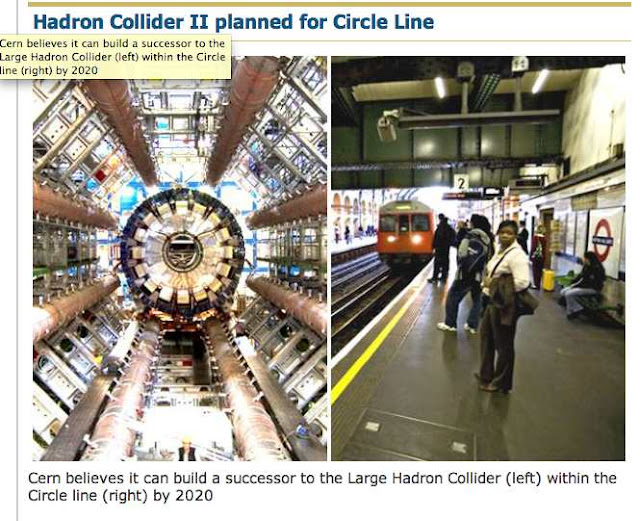 
London Underground is in talks with the European Organisation for Nuclear Research (Cern) about the possibility of using the 23km tunnel of the Circle Line to house a new type of particle accelerator similar to the Large Hadron Collider in Geneva.


Particle physicists believe the existing tunnel can be adapted to take a small-scale "atom smasher" alongside the passenger line at a fraction of the cost of building a new tunnel elsewhere in Europe. They are understood to have approached London Underground with a view to announcing a feasibility study later this year.


Specialist engineers commissioned by Cern have already produced a preliminary report, seen by The Independent, which proposes installing supercooled magnets and collision detectors at strategic positions on the Circle Line. The main collision experiment will be sited at the newly refurbished Westminster Station, directly below Portcullis House, the offices of more than 200 MPs.


Although there are still considerable technical problems to overcome, such as a geo-magnetic "kink" in the circuitry at Edgware Road station, Cern is quietly confident that it will be able to convince London Underground of the merits of the scheme, which should result in the first air-conditioned underground line as a spin-off of installing supercooled magnets below ground.


The idea was initially mooted in the mid-1980s as an alternative site to the 27km tunnel below Geneva but the idea was dropped. Now, with improvements in technology and miniaturisation of the equipment, Cern believes it can build a successor to the Large Hadron Collider within the Circle line by 2020.


It would mean that two beams of protons would be travelling in clockwise and counterclockwise directions at 99.999999 per cent of the speed of light, within feet of Circle line passengers stuck in perpetual immobility.


However, health and safety advisers to London Underground are understood to be concerned about the proposal, and have raised the prospect of a mini black hole being created at Westminster when the two proton beams collide to recreate the conditions of the Big Bang.


A spokesman for London Underground said the proposal is not as foolish as it first seems: "It has merits."

This would be pretty convenient for a member of my tribe who is completing a Physics PhD just up the road from a Circle Line station.
No comments: