Scoops and scalps: a postcard from London 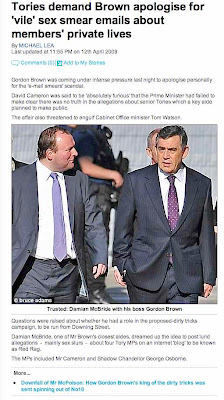 The lead story here has been the resignation of a key aide to Gordon Brown. The aide has been outed concocting a sex and drugs and mental health smear campaign against the Conservative leadership and their wives. So far, so sordid, but the big point is that this is a terrific scoop and scalp for blogger, Guido Fawkes, who obtained the smoking gun emails and skilfully played the quiet Easter news cycle to maximum effect. (Guy Fawkes, by the way, tried to blow up the House of Lords and King James I in 1605 as part of a Roman Catholic plot. His effigy is burnt every November the 5th on Bonfire Night).

The story is rife with British comic detail and vendettas all around, not least the envy and treachery of Guido Fawkes' MSM competitors, up to and including a pre-emptive betrayal of Guido's scoop by the supposedly conservative Daily Telegraph. An irony is that anyone can open a blog on the Telegraph site and Guido Fawkes himself has done just that - to embarrassing effect, writing:

Telegraph Has Behaved Terribly Over Smeargate

There are a lot of bitter, jealous journalists at the Telegraph and you have behaved shamefully over the McBride story. You even tipped off Downing Street in advance as to exactly what I was up to. It reflects on you a lot more than it does on me.
You revealed sources, broke a confidence, breached a signed non-disclosure agreement and behaved like patsys for McBride.

You still failed to spoil the story. Your political team is about as weak as it gets, that is why you sucked up to Downing Street.
The Telegraph was once run by gentlemen for gentlemen. This would never have happened under Deedes or Charles Moore.
Do your worst. 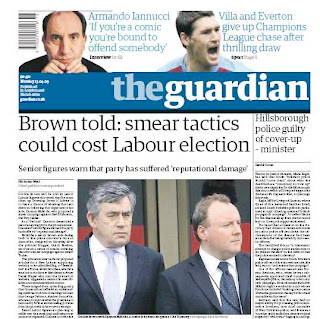 This is manna from heaven for the Tories. No one thinks Gordon Brown was involved,*** but he certainly turns a blind eye (he actually does have a blind eye) to the poisonous shenanigans of his entourage as long as there's political advantage. For many years the Brownian poison has been directed at rivals on his own side. This is a different game with different rules. Gordon Brown has never been elected by any non-politician outside his constituency of Fife in Scotland, since he famously bottled out of calling a General Election soon after he took over from Tony Blair. He lacks legitimacy, moreover he's accident prone. He flourished alongside Blair, whom he was constantly plotting to unseat, but since moving to centre stage has had a run of ferocious bad luck which he attracts like a mountain massif attracts its own weather.

So politics in both London and Washington would be tragic were it not so funny. Look on the bright side. Things change.


***Update: uh-oh.
Update 2: Today is Guy Fawkes' birthday, 13th April 1570. This all brings back happy memories when my brothers and I would take a stuffed guy in a wheelbarrow from house to house calling 'penny for the guy'. The pennies were spent on fireworks.
No comments: