What's the nice way to kill a Presidential candidacy?

Let the candidate do it himself:

As an equal-opportunity sexist and the father of a tribe of Anglo-Australian beauties, I'm pleased to see that chivalry lives on in Australia's heart:

The mayor of a remote Australian mining town has come under fire after saying that female "ugly ducklings" might benefit from its shortage of women.
John Molony told a newspaper last week that "with five blokes to every girl, may I suggest that beauty-disadvantaged women should proceed to Mount Isa".
..

"Quite often you will see walking down the street a lass who is not so attractive with a wide smile on her face. Whether it is recollection of something previous or anticipation for the next evening, there is a degree of happiness," he said.
"Some, in other places in Australia, need to proceed to Mount Isa where happiness awaits.." 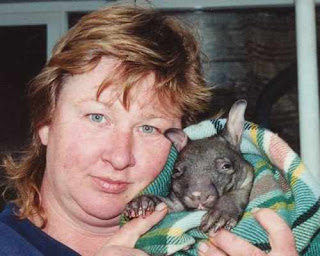 My own daughters are beyond compare and if I could sell them, I'd be very rich....but have you noticed how often Australian women look like wombats, either the common wombat or the hairy-nosed wombat? This is a hairy-nosed wombat :

Some biologists say it's convergent evolution, some say it's miscegenation. I call it 'wombatitude.'
No comments: